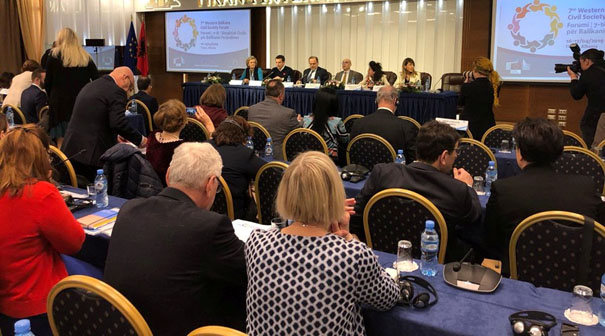 Tirana, Albania — The 7th edition of the Western Balkans Civil Society Forum, which took place in Tirana on 16 and 17 April, concluded with a call for the next Commission to maintain the Western Balkans enlargement policy as one of its priorities in the interest of both the region and of the EU.

More than 180 representatives of civil society organisations from the Western Balkans and the EU took part in the event, organised by the European Economic and Social Committee (EESC) with the support of the European Commission and the Regional Cooperation Council.

The EU TACSO Project supported the Forum by ensuring the participation of 50 CSO representatives from the Western Balkan countries.

This two days event tackled many challenging topics, such as the role of civil society organisations in promoting regional cooperation (trade and investment, connectivity and people to people relations), the state of social dialogue, as well as enabling civic space in the region.

Luca Jahier, President of the EESC, observed in his opening speech that “the enlargement, and in particular the spread of the EU’s democratic values and legal standards to the Western Balkans region, is in the interest of both our partners from the region and of the EU”.

Deputy Minister for Europe and Foreign Affairs Sokol Dedja added that “regional cooperation is not only intergovernmental cooperation, but also between societies” and praised the EESC for the important role it plays in increasing public support for EU enlargement.

In his speech, Colin Wolfe, Head of Unit for Western Balkans Regional Co-operation and Programmes (DG NEAR, European Commission), took the opportunity to recall civil society involvement in the successful conclusion of the recent Ministerial Meeting on Clean Energy Transition in the Western Balkans, held on February 21st 2019 in Podgorica (Montenegro), where environmental concerns shaped a broader energy renewables and efficiency perspective,  including a cleaner air perspective to balance river basin issues, and therefore to highlight coal-based thermal power station degradation alongside over-proliferation of small hydro projects.

He added that the Second Western Balkans Digital Summit, held in Belgrade in early April 2019, with its Regional Roaming Agreement, had focussed on business and creative opportunities for young people. He also emphasized the importance of EU support targeting young people and women entrepreneurs through the strong presence of the Western Balkans Enterprise Development and Innovation Facility, now joined by the recently launched Western Balkans Guarantee initiative.

Wolfe concluded by highlighting that EU support for civil society in the Western Balkans and Turkey was estimated (both regionally and bilaterally) at approximately €400 million under IPA II since 2014. He also mentioned the willingness of Commissioner Johannes Hahn to engage regularly in open sessions with civil society and social partners on his visits to the region, and added that DG NEAR has just launched the Call for the next phase of the Civil Society Facility, with over €18 million for civil society networks – addressing over eleven batches of issues, such as Roma integration, protection-sensitive migration, gender issues, freedom of media, youth unemployment, reconciliation, and others.

One of the major concerns expressed in the Western Balkans Civil Society Forum was the shrinking space for civil society in a number of countries in the region. Participants emphasised in the final declaration that “freedom of expression and free media are prerequisites for establishing solid democracies” and condemned the attacks on civil society organisations (CSO) by representatives of governments and government-funded media. It was also agreed that national Economic and Social Councils should play an important role in the implementation of economic programmes. Collective bargaining, as a key mechanism for creating a fair and sustainable wage system and combating the gender pay gap, was strongly supported.

Trade issues were also discussed by the participants, who insisted on the need for further integration of regional economies by lifting all unjustified barriers imposed on imports of goods and services and attracting private investments through a favourable and more predictable business environment.

Regarding youth-related policies, the final declaration encouraged the authorities of the Western Balkans partners to invest “considerably” in quality as a way to reduce youth unemployment, but also to ensure that young people are better integrated in the Western Balkans, as this was the only way to “mitigate their tendency to emigrate”.