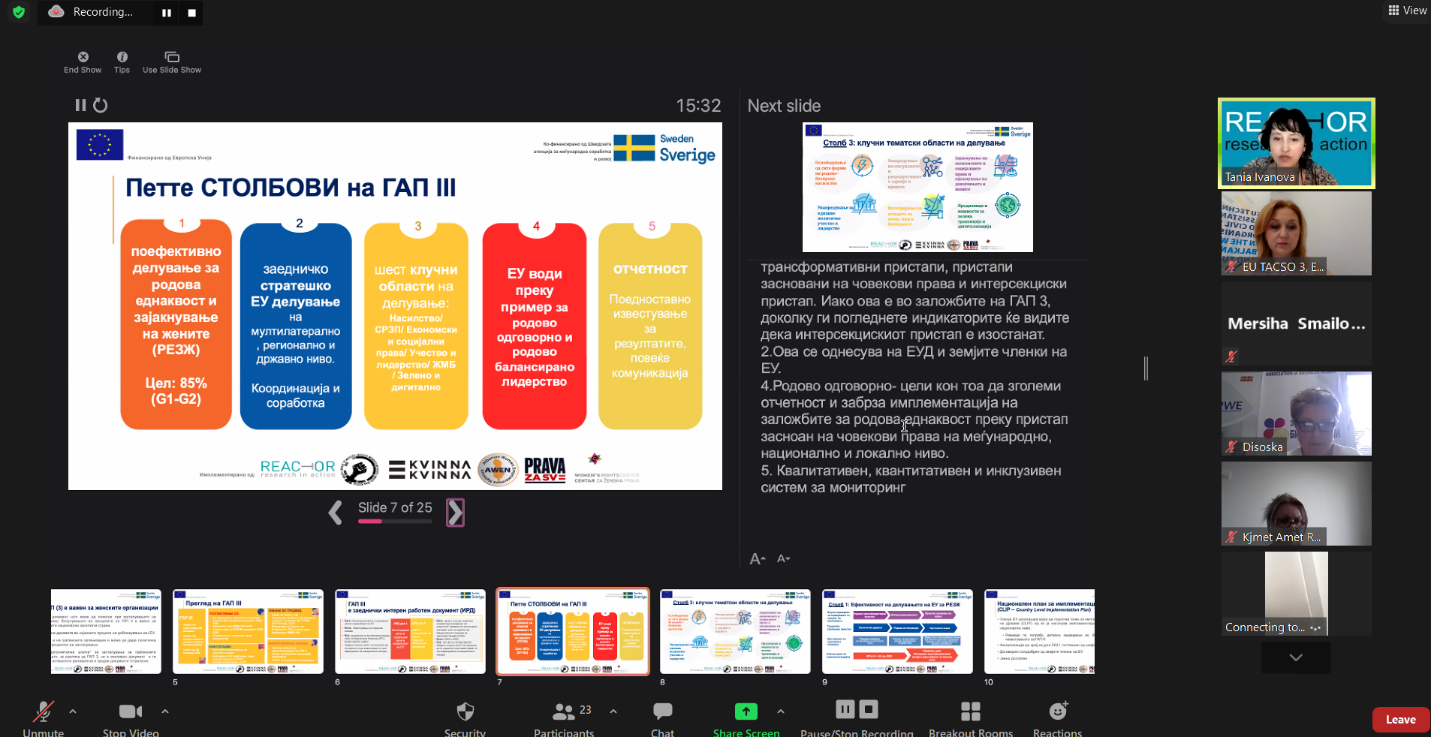 On 22 June, EU TACSO 3 supported an on-line event on the “EU Gender Action Plan III (GAP III) and Country Level Implementation Plan (CLIP)” in the Republic of North Macedonia, organised by the Reactor- Research in Action (Reactor). This on-line consultation aimed to introduce the audience to the content of GAP III, its direct link to the Instrument for Pre-Accession III (IPA III) and other relavant international obligations and to provide CSOs’ views  with regards to what gender inequalities exist, how can CSOs be involved in the implementation of GAP III and what are their priority areas for work. The event is a part of the consultation process, which requires all EU Delegations and Offices in the region to prepare a GAP III CLIP. The CLIP also should be aligned with IPA III funding windows and GAP III objectives. 21 representatives of women organisations and CSOs working in the field of human rights attended the event.

The event was addressed by Irena Ivanova, Programme Manager in the Delegation of the EU in the Republic of North Macedonia. She emphasized the need for support to the local grassroot activism and CSOs work at the local level. “CSOs are one of the most important stakeholders in the society, especially  grassroot organizations who work in the field”. She also reflected on the progress made so far with the adoption of legislation for prevention and protection from violence against women and family violence and welcomed the efforts for synchronizing the legislative framework with the other important national-level regulations. In addition, Ivanova  discussed the need for improvement of the situation with the participation of women in local decision-making and called participants to provide input on priorities to be included in the CLIP.

During the opening remarks, Tanja Hafner Ademi, Team Leader of the EU TACSO 3 project, highlighted the importance of the topic in the work of EU TACSO 3. Amongst many interventions, the project strives to have a strong gender balance in its activities, both in terms of organizations and participants taking part in project activities as well as of addressing topics of importance to gender equality. In this regard, she emphasized the fact that due to the advocacy of organization working on gender issues, the Guidelines for Support to Civil Society in Enlargement Region, 2021-2027 document by the Europea Commission will include reference to GAP III and gender-sensitive indicators to allow EU TACSO 3 to measure the state of gender quality in civil society. 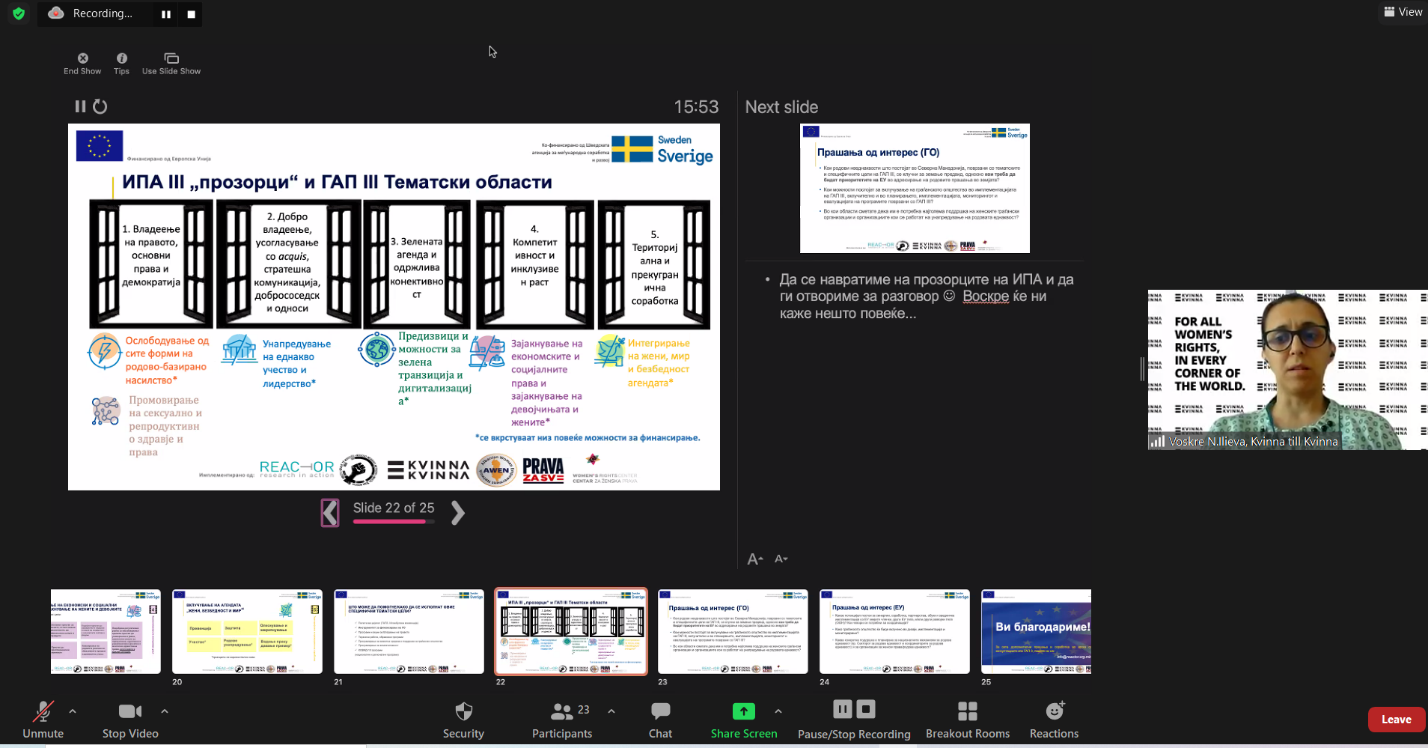 During the main session, Tanja Ivanova, President of Reactor presented the EU GAP III/CLIP. In her presentation, she  conferred the linkage of the GAP III/CLIP with other regulations. The Plan has five pillars which include: 1) gender equality and women empowerment, 2) coordination on the multilateral, regional level and national level, 3) six key areas of action, 4) EU lead by example of gender responsible leadership and 5) accountability. In addition, she presented the thematic areas listed to contribute to all five windows of IPA III.  During the discussion, participants emphasized the priorities to be considered with GAP III/CLIP should include: empowering rural women and those coming from marginalized groups in the realization of their economic and social rights, increase of participation of women in local decision–making, the need for financial support to the grassroot organizations and their active inclusion in the national and local level policy- making processes, the need for support to the local activism, support to women refuges and migrants etc.

The event wrapped up with a common conclusion that support is needed in almost all areas of GAP III and that the empowerment of local grassroots organization is very important for making further progress on the issue of gender equality. Organizations were invited to submit further written proposals for priorities that should be the focus of EU GAP II/CLIP.

Civil Society Organisations and other stakeholders were consulted on the GAP III and  CLIP in Kosovo, too. To find more information on this please see the following link: https://tacso.eu/csos-and-stakeholders-consulted-on-the-eu-gender-action-plan-iii-and-north-macedonia-country-level-implementation-plan/