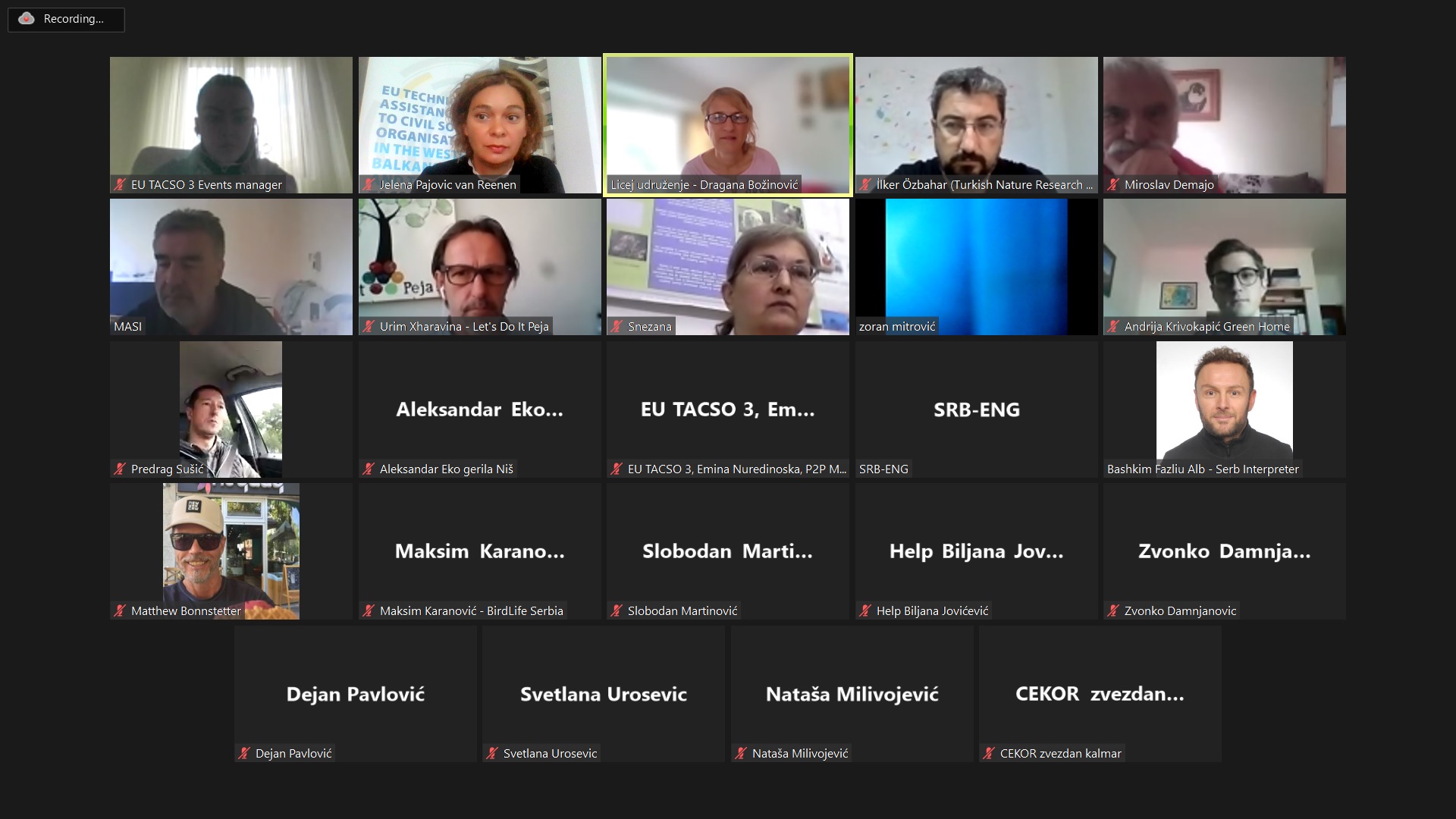 On 23 and 24 September 2021, EU TACSO 3 and Association Licej from Serbia, organised a People to People (P2P) event: Conference of Nature Conservationists for the Balkan Region “Green Wave”. The event was initiated by organisations that participated in wide citizens movement to defend Old Mountain rivers and mountain ecosystem in Serbia.
The conference aimed to create a regional network of activists, scientists, and organizations to strengthen the impact and protection of basic human rights, especially those that focus on the conservation of natural resources.
Numerous hotspots in the Balkan region are defended by local activists, and these initiatives are vital for the entire region. Several of those initiatives were present at the conference and discussed with other participants current developments related to their communities such as endangerment of biodiversity of Great War Island in Belgrade, hydro plants on the Rzav river and the effects it has on the ecosystem, current developments in Montenegro including Buk Bijela hydro plant on Tara river and others. The conference also included public hearing organised by two organizations – World and Danube and the Dunavac Shodros Initiative – which gathered eminent individuals and representatives in Novi Sad trying to defend Kamenička ada, Dunavac and Šodroš, natural public goods and floodplains with primary function as green infrastructure in flood defence, from urbanisation envisaged with the new General urbanistic plan for Novi Sad. “It’s always difficult for people to see the long-term contribution of natural habitats. On the other hand, when it comes to construction, you have a specific estimate of how many square meters it will be and what the profit will be. It’s hard to show people that it’s just one short-term economic gain again, for a narrow circle of people, while long-term benefits that come from preserved nature, is simply incomparable” said one of the speakers on the public hearing.
How to defend the nature and human health as well as quality of living from profit-oriented entities as well as the corruption in public institutions facilitating these was one of the main topics discussed by participants of the Green Wave conference .
This two-day on-line conference provided opportunity for more than 30 participants from the region to hear from eminent experts lectures on the topics such as History of nature protection and local initiatives around the world; Significance of Geo-heritage and potentials for geo-tourism of the region; Nature protection and quality of green economic growth as well as the Legal framework for environment protection. This on-line event was also envisaged as a step towards establishing stronger cooperation and enabling exchange between activists and scientists dealing with nature preservation in the region. Thus, part of the event was devoted to development of Ethic Code of nature conversationists and Declaration on regional cooperation and mutual support in the area of environment protection that should be signed by all interested initiatives in the upcoming period.