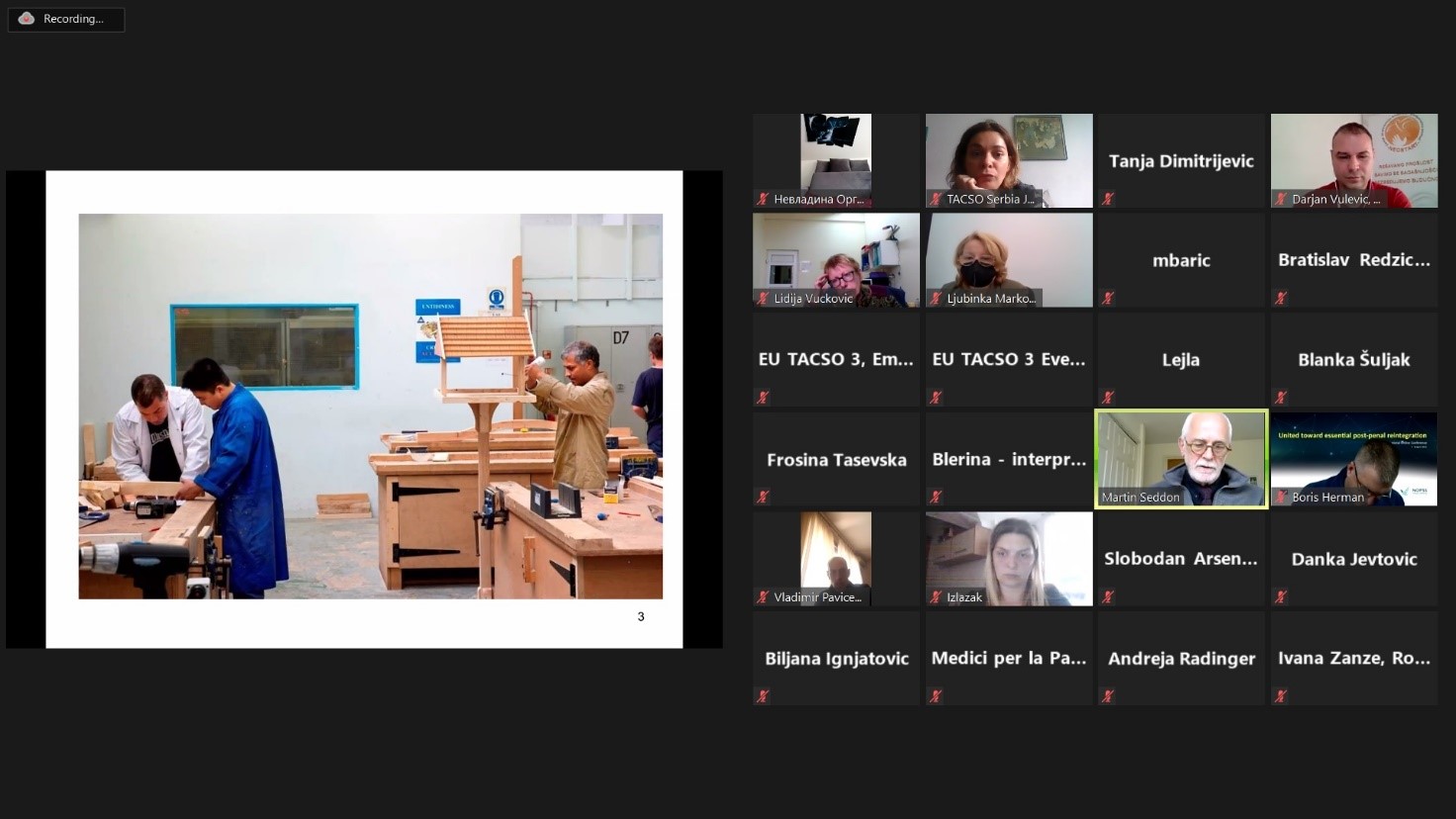 On 7th and 8th April, conference titled: “United Toward Essential Post-Penal Reintegration” organised by the Network of Organizations in Post-Penal Support in Serbia (NOPSS) was supported by EU TACSO 3 project under its P2P On-demand Programme. The aim of the conference was: to open regional dialogue about strengthening post-penal support and protecting the human rights of previously incarcerated persons, develop models of innovative approaches of cooperation between civil society organizations (CSOs) and governmental institutions and develop a network of regional CSOs and other stakeholders working in the area of post-penal support. The conference gathered more than 50 participants from Serbia, Kosovo*, North Macedonia, Montenegro, Croatia, Italy, Netherlands and the United Kingdom. Representatives of civil society organisations, governmental institutions and international organizations such as EULEX, OSCE and Council of Europe shared their experience and knowledge in the field of post-penal reintegration.

In the opening session, accent was put on the essentiality of the post penal re-integration as measure to ensure that previously incarcerated persons equally get the opportunity to stable sources of income and housing, access to healthcare, education and other services as well as consistent and reliable social support from peers and family members. In their opening remarks, Ms. Tanja Dimitrijevic and Mr. Darjan Vuk Vulevic from NOPSS also stated that joint cooperation between government, civil society and other stakeholders is needed to come up with a united approach in support of these people, as practice show lack of support leads incarcerated persons back to drugs, crime and recidivism.

The rest of the first day was devoted to the presentation of the current situation and future prospects of post-penal reintegration, as well as cooperation between civil society and state institutions in Serbia. Ms. Jelena Srnic Nerac, Head of the Department of Treatment and Alternative Sanctions at Prison Administration and Operation, Serbia, looked at post-penal support in Serbia from two angles: what civil society can do and what are the possibilities for cooperation between the responsible state institutions and civil society, while Mr. Bratislav Redzic, National Program Officer, OSCE Mission to Serbia, highlighted the role of international organizations, using the OSCE as an example, in improving civil society capacity for post-penal support. The importance of raising awareness on post-penal reintegration had its place on the agenda, as the recent campaign developed and implemented by Kosovo Correctional Service with the support of EULEX in Kosovo was presented to the participants from the region through video footage.

Participants had the opportunity to debate on the topic through work in smaller groups, tackling it in different contexts and perspectives such as the effects of the COVID-19 pandemics on post-penal support, the role of media in fighting the stigmatization of previously incarcerated persons as well as the specifics and challenges of reintegration of the juveniles and people who use drugs and cooperation between CSOs and governmental institutions.

The second day of the conference gave insights on the regional experiences, as representatives from governmental institutions from Kosovo, Montenegro, Croatia and North Macedonia shared practices in post-penal reintegration in their countries respectively. Mr. Rasim Selmani, Deputy Director General of the Correctional Service in Kosovo, Ms. Dragica Rajkovic from the Institution for Execution of Criminal Sanctions in Montenegro and Ms. Emilija Vasilevska from the Directorate for Execution of Sanctions in North Macedonia discussed what have been done so far in their countries and the challenges that they are facing in both every day work and when efforts are made for bolder changes and improvements. Ms. Martina Baric for Directorate for Prison System and Probation Service from Croatia reflected on their experience in the field and developments made in an EU Member country.

The second session was opened by the State Secretary in the Ministry of Justice in North Macedonia, Frosina Tasevska on the engagement of civil society in post-penal support in North Macedonia-current practice and perspectives. Mr. Martin Seddon, Penal Reform Consultant in transitional and developing countries from the UK presented the findings of his latest research on post-penal reintegration in the UK, supported by many examples observed during the study and followed by conclusions and recommendations such as approaching the problem and equipping prisoners with skills and preparation for life after prison in the last days before release, and the important role that civil society organizations can play after the release of these people by supporting them through the provision of emergency support services, temporary accommodation as shelters, offering training in specific skills that are sought after in the market, and developing rehabilitation centers and programs for ex-prisoners who have struggled with any type of addiction.

Participants were also given the opportunity for more focused discussions that resulted in sketching ideas on possible solutions for enhancing cooperation between CSOs and government as well as enhancing regional cooperation in post-penal reintegration.

The meeting resulted in agreement on further committed work on enhancing regional cooperation and engagement of civil society in post-penal reintegration. To further promote the initiative Facebook Page (https://www.facebook.com/UTEPPR) and Twitter (https://twitter.com/TowardPost) were launched. Also, a private Facebook group to help facilitate communication between participants was established. The next steps after the Conference are:

* This designation is without prejudice to positions on status, and is in line with UNSCR 1244/1999 and the ICJ opinion on the Kosovo declaration of independence.